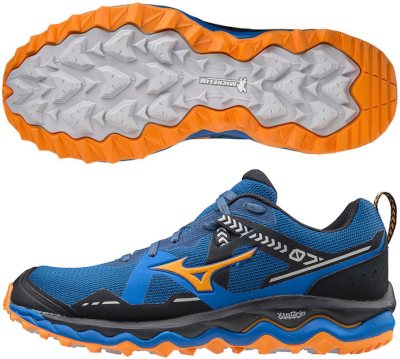 The imposing Mizuno Wave Mujin 7 maintains the spirit of its predecessor and also the high weight on scale, one of the highest in the market for running shoes beyond the asphalt. It is a trail running shoe oriented to long distances with plenty of cushioning and protections to be able to go almost anywhere. Either way it seems to have found its niche in an increasingly competitive category, in which not only great sports performance is demanded but also a modern and attractive design (like the one presented by the New Balance Fresh Foam Hierro v6) to show off in the day to day.

It features few changes from the previous edition Wave Mujin 6 and almost all are concentrated in the upper. It maintains the same idea of support with a pair of mountain spikes (inverted uves), although now the webbing is only in the part closest to the ankle (perhaps where it is most needed) leaving the front in a thermofused element. The heel counter provides stability that almost borders on stiffness and the forefoot still has a TPU piece that protects the toes from anything in the way. The tongue is stitched on both sides so it not only keeps its position by avoiding annoying creases but also keeps out pesky debris that pop out while running around.

The rest of the Wave Mujin 7 maintains what has worked so well so far, including the 10 mm drop. The midsole features a layered configuration reminiscent of the Foam Wave concept debuted in the top-of-the-line asphalt Wave Sky 3. The star compound in the midsole remains the innovative U4icX™ which is combined with the expected Wave™ piece in the rear and an anti-rock plate (ESS Rock Plate) in the forefoot to protect the sole against sharp elements. The sole is identical and maintains the collaboration with the prestigious tire manufacturer Michelin with whom the XtaGrip technology of staggered lugs that adapt to different terrains has been developed, always offering the best possible grip. If it works, don't touch it. Let's go for a run.